Hysterectomy is one of the most commonly performed abdominal surgical procedures. The majority of patients referred to my practice for care of a gynecologic malignancy, pre-cancerous condition, or complicated benign pelvic problem will require a hysterectomy as part of a treatment plan.

What is a hysterectomy?

Let’s start with some terminology: 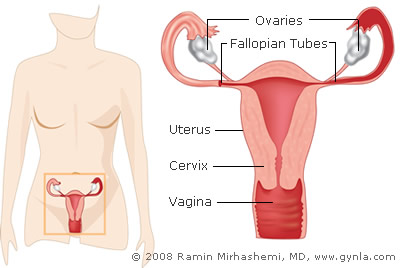 Although not strictly correct the term “hysterectomy” generally implies removal of both the uterus and the cervix. When both ovary and fallopian tube are removed the operation is referred to as a  "salpingoophorectomy”.

What are the different types of hysterectomy?

Hysterectomies can be categorized by the route of removal, technique of removal, and by the extent of surrounding tissue removed.

1. Robotic Assisted approach. The uterus is removed using minimally invasive techniques. The surgeon utilizes robotic tools to remove the uterus via 3 to 4 small 8mm incisions. This technique is more accurate and precise utilizing the superb magnification of a 3-dimensional camera.

2. Trans-abdominal approach (an “abdominal hysterectomy”). The uterus is removed through an incision made on the abdomen.

3. Trans-vaginal approach (a vaginal hysterectomy). The uterus is removed completely through the vagina.

Type I. None of the tissue surrounding the uterus or cervix is included in the operative specimen. The ureters and bladder are not mobilized.

Type II (“modified radical” hysterectomy). A small margin of tissue surrounding the uterus and cervix (parametria and uterosacral ligaments) is removed with the operative specimen. The ureters and bladder are not mobilized.

Type III (“radical” hysterectomy). The amount of parametria and uterosacral ligament removed with the uterus is greater than a Type II procedure. The
ureters are mobilized. The bladder is minimally mobilized.

Type IV. The parametria and uterosacral ligaments are completely removed. Portions of the bladder/ureter/rectum are included in the operative specimen.

What kind of hysterectomy do I need?

With rare exceptions the Type II, III and IV procedures described above are reserved for treatment of cancers of the cervix and (occasionally) ovary. Most hysterectomies for benign conditions as well as early cancers of the uterus and ovary will be Type I procedures.

Robotic Hysterectomy can be performed practically for all types of hysterectomies, with some exceptions such as advanced ovarian cancer. This novel new technology for performing minimally invasive gynecologic surgery has many advantages over conventional abdominal surgery.The pros of this technique for hysterectomy are the following:

Vaginal hysterectomies can be appropriately performed only when:

Can I have a “bikini” incision?

The fact that you are a patient in my practice means that you probably have either a gynecologic malignancy or a complicated benign gynecologic problem. If for some reason you are not a candidate for minimally invasive surgery such as Robotic Surgery or Laparoscopic Surgery, and your hysterectomy will probably require an abdominal rather than a vaginal approach, a low transverse (Bikini Incision) is most likely utilized. Most surgeries for benign indications and many surgeries for treatment of pelvic malignancies can be performed through a low transverse incision or a Bikini Incision.
PROS:

A hysterectomy for any benign or malignant indication, which may not be done through a Bikini Incision, may be performed through a Midline Incision.

Will my bladder fall down after a hysterectomy?

When my uterus is removed is there an empty space in my pelvis?

No. Think of the pelvic contents being analogous to a bowel of spaghetti and meatballs (your intestine is the “spaghetti” and the uterus is a “meatball”). If you were to remove one meatball from the middle of the bowel you are not left with a “hole” – everything just “flops” together. The same thing happens in the pelvis when the uterus is removed.

What is at the top of my vagina after a hysterectomy?

After the uterus and cervix are removed the top of the vagina is sewn closed.

Will intercourse be different after a hysterectomy?

If you had a satisfying sexual life prior to hysterectomy then the same will be true after surgery. If you are premenopausal you may notice a decrease in vaginal secretions after a hysterectomy since cervical mucous will no longer be produced.

Every decade or so a discussion resurfaces concerning the value of removing or not removing the cervix at the time of hysterectomy.

Prior to 1960 many hysterectomies were performed by non-gynecologists (Family Practioners, General Surgeons, etc). Physicians not specifically trained in female pelvic surgery felt that removing only the top part of the uterus and leaving the cervix in place would decrease the likelihood of damage to the bladder, rectum and ureters. For this reason the supracervical or subtotal hysterectomy was popularized at that time.

Now that hysterectomies are performed exclusively by gynecologists the original reason for not removing the cervix has been eliminated. In recent years, however, there has been a resurgence of interest in the subtotal procedure. This interest has been fueled by originally unsubstantiated claims that the presence of a cervix was important in maintaining orgasmic response and pelvic support. In recent years a number of well designed studies have addressed these issues and, basically, found no justification for these claims. I have listed a number of these studies below.