Vaginal cancer is one of the least common gynecologic malignancies. Because this cancer is more common in post menopausal women it is of utmost importance for this patient group to see their gynecologist annually. If caught early, vaginal cancer is curable.

There are two main types of vaginal cancers: 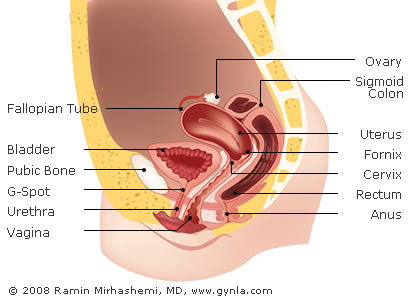 The risk factors for vaginal cancer include:

Surgery is the most common treatment of vaginal cancer. The following surgical procedures may be used:

Even if Dr. Mirhashemi removes all the cancer that can be seen at the time of the surgery, some patients may be given radiation therapy after surgery to kill any cancer cells that are left. Treatment given after the surgery, to increase the chances of a cure, is called adjuvant therapy.

Chemotherapy is a cancer treatment that uses medicines to stop the growth of cancer cells, either by killing the cells or by stopping them from dividing. When chemotherapy is taken by mouth or injected into a vein or muscle, the drugs enter the bloodstream and can affect cancer cells throughout the body The way the chemotherapy is given depends on the type and stage of the cancer being treated. Topical chemotherapy for squamous cell vaginal cancer may be applied to the vagina in a cream or lotion.