Uterine sarcoma is a rare type of uterine cancer which accounts for 10% of all cancers arising from the womb. These tumors typically are derived from the muscle layer of the uterus and its supporting structures. There are 3 main types of uterine sarcomas:

Sarcomas of the uterus tend to be slightly more aggressive than the conventional adenocarcinoma of the lining of the uterus. These tumors have a propensity to travel through the blood stream and the lymphatic system to spread to other distant sites. Once identified, these tumors should be removed and treatment should start expeditiously. 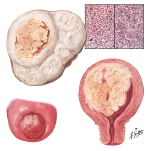 Most common symptom of uterine sarcoma is abnormal bleeding. Here are a list of other associated symptoms which should be immediately evaluated by your gynecologist:

Surgery is the most common treatment for uterine sarcoma. This usually involves removal of the uterus and its surrounding structures, including the cervix, ovaries and fallopian tubes, as well as regional lymph nodes in the pelvis.

Even if Dr. Mirhashemi removes all the cancer that can be seen at the time of the surgery, some patients may be offered chemotherapy or radiation therapy after surgery to kill any microscopic cancer cells that are left so as to minimize the risk of recurrence of cancer.

Chemotherapy is a cancer treatment that uses medicines to stop the growth of cancer cells, either by killing the cells or by stopping them from dividing. When chemotherapy is taken by mouth or injected into a vein or muscle, the drugs enter the bloodstream and can affect cancer cells throughout the body The way the chemotherapy is given depends on the type and stage of the cancer being treated.

Hormone therapy is a cancer treatment that removes hormones or blocks their action and stops cancer cells from growing. Hormones are substances produced by glands in the body and circulated in the bloodstream. Some hormones can cause certain cancers to grow. If tests show the cancer cells have places where hormones can attach (receptors), drugs, surgery, or radiation therapy are used to reduce the production of hormones or block them from working.