This post will go over (1) what uterine and endometrial cancer is, and more specifically, what it does, (2) how it commonly arises and factors that can increase or decrease odds of developing uterine cancer, (3) warning signs, and (4) treatments

Endometrial cancer is the most common gynecologic malignancy in the United States. The Uterus is a very important organ, which is responsible for carrying a pregnancy to term. The uterus is comprised of 2 major layers, an inner lining called the endometrium and an outer muscle layer called the myometrium. 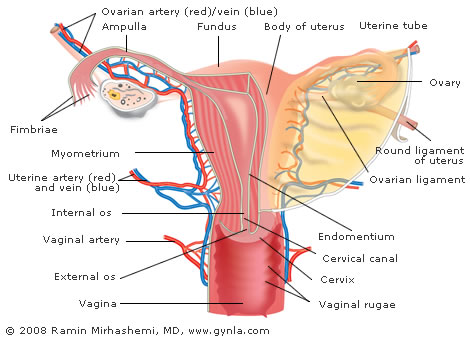 Our lead doctor is currently performing 100% of the uterine cancer surgeries via the Da vinci robotic platform.

WHAT PARTS OF THE BODY ARE AFFECTED BY UTERINE CANCER?

It should be clear from the name, but uterine cancer develops in the tissue of the uterus. The uterus or “womb” is the area of the body where human fetuses develop during gestation (it is where women carry babies). The uterus accepts a fertilized ovum which travels into the uterus from the fallopian tubes where it implants in the endometrium (the tissue). The ovum eventually becomes an embryo which grows a placenta and eventually grows into a fetus. In short, the uterus is a critical sex organ responsible for the development of fetuses.

WHAT IS UTERINE AND ENDOMETRIAL CANCER? WHAT DOES IT DO?

Uterine cancer is a general term of a broad range of cancers so that this section will focus more specifically on endometrial cancer. However, in general, doctors believe that uterine cancer is caused by hormone imbalances which can cause abnormal cell growth and cancer. However, how this mechanism develops is currently not known by the medical community.

Other symptoms do occur, but it is rare, including:

Because endometrial cancer begins inside the uterus, it does not usually show up in the results of a Pap test. For this reason, a sample of endometrial tissue must be removed and examined under a microscope to look for cancer cells. One of the following procedures may be used:

By far, the biggest risk factor associated with endometrial cancer are elevated levels of hormones. How do you develop high levels of hormones, in particular, estrone and estrogen? About 40 percent of cases of elevated hormones are believed to be linked to obesity. In obese individuals, the excess adipose (fatty) tissue increase the conversion of one hormone into estrone and estrogen. When women have elevated levels of estrone, cause no or reduced ovulation which can expose the uterine tissue to continuously high levels of estrogen. In fact, another condition, polycystic ovary syndrome (which causes no or irregular ovulation) is also linked to obesity.

Furthermore, in connection with obesity, individuals with high levels of cholesterol – such as those with Type I or Type II diabetes, are also at higher risk of developing endometrial cancer.

Women who engage in hormone replacement therapy (i.e. estrogen replacement) without taking progestin to balance out the estrogen are also at a higher risk of developing endometrial cancer. Finally, women who have long periods of fertility without interruption by pregnancy or some other cause are also at a higher risk. So, women who never have children are at higher risk of endometrial cancer than women who bear children because, during the pregnancy period, women severely reduce the production of various hormones. Finally, women who go through menopause later in life are also at higher risk (because they are being exposed to estrogen longer).

Some other factors include:

Again, keep in mind that these are risk factors – not causes. Having these factors present are correlated with higher rates of people who develop endometrial cancer, but it isn’t dispositive.

Endometrial cancer is first diagnosed by a physical examination wherein the physician removes some uterine tissue for testing. If the tests find that cancer the characteristics of cancer are present, the physician will order medical imaging to see the extent of the cancer (i.e., to see if it has spread, and if yes, to what extent). This section will go over how the diagnosis process goes.

In general, physicians do not engage in routine testing for people who are not presenting symptoms (for example, contrast that with screening for breast cancer which is recommended for all adult women every one to two years). The reason for this standard is because endometrial cancer is easily cured if it is caught early and the most common symptom is easy for women to identify (i.e., post-menopausal bleeding).

In fact, common tests you are familiar with aren’t necessarily helpful. For example, pap smears are not good tests for endometrial cancer because the test will be normal 50 percent of the time. Pelvic examinations also do not usually detect endometrial cancer – especially if the cancer is early. However, if you have Lynch syndrome, you should start having annual tests by 35. Some physicians are beginning to conduct transvaginal ultrasounds to measure the thickness of uterine tissue in women who are experiencing postmenopausal bleeding.

The primary treatment for cancer of the uterus is to remove the cancerous organ. This involved performing a hysterectomy.  Your doctor will offer you the latest minimally invasive technology to perform your hysterectomy. This involved utilizing the Da Vinci robotic platform to complete the surgery via 3 or 4 small 5 to 8 mm incisions. This is superior to open surgery due to the following reasons:

The first step in treatment is surgery. About 90 percent of women who are diagnosed with endometrial cancer are treated with surgery. The standard procedure is to remove the uterus (hysterectomy) and the removal of both ovaries and Fallopian tubes. This may seem like a drastic procedure, however, recall that the procedures are conducted in post-menopausal women, therefore, these various sex organs are no longer needed for reproduction therefore it is a prophylactic solution.

If endometrial cancer has advanced to Stage III or Stage IV (i.e., much further than Stage I or II), then your physician will likely recommend cytoreductive surgery (i.e., surgery to remove as much of the cancerous tissue as possible). As part of the procedure, it is also common to take a biopsy of the omentum (a part of your stomach near the bottom) to see if the cancer is spread. Finally, if the cancer is Stage IV and has metastasized in other parts of the body (i.e., it is known that the cancer has spread), the common technique is open-abdomen surgery to remove the infected tissues.

In a few cases, if you don’t want to have the surgeries conducted, (e.g., women who want to preserve fertility), you can have the condition treated with medications until childbearing ends. In these cases, the doctor will closely monitor your condition to ensure that they can quickly perform the procedures

Radiotherapy is another technique used after surgery in patients diagnosed with Stage I or II endometrial cancer. There are two delivery methods: vaginal brachytherapy and external beam radiotherapy. Brachytherapy is a direct-delivery method of chemotherapy to the affected area. In this case, it is delivered through the vagina. The direct delivery method is preferred because it has reduced risk of toxicity. Conversely, external beam radiotherapy sends a beam of radiation through the body to the affected area. The direct delivery method is used to treat any remaining cancerous tissue in the uterus, while, the beam method is used to treat cancerous tissue in other parts of the body.

Finally, hormonal therapy was once a wide-spread technique that was believed to be beneficial in all cases of endometrial cancer cases. However, later developments found that it is only useful in treating endometrial cancer that has estrogen and progesterone receptors in which case progestins can be used in the treatment. Finally, other forms of endometrial cancer can be treated with a variety of medications which your physician can discuss with you if you are a good candidate.

As you are well-aware, cancer doesn’t necessarily always go away – there is always a risk that it can flare back-up therefore monitoring is a critical aspect of any cancer treatment. Your physician is likely to monitory certain tumor markers which indicate increased risk of flare-ups. Furthermore, your physician may also order periodic CT and MRI scans for women who (1) have a history of endometrial cancer and (2) those who suffered from advanced stages in the disease

PROGNOSIS OF UTERINE AND ENDOMETRIAL CANCER

Prognosis measurements of cancer survivors is measured in the number of years after appropriate treatment because what matters are two measurements (1) how many people survive and (2) for how long. Keep in mind that, ultimately, everyone will pass away eventually so patients can’t expect to survive forever. In terms of endometrial cancer, the five-year prognosis 80 percent survival for women who undergo appropriate treatment (surgery and chemotherapy/radiotherapy). However, as expected, the survival rights drop for patients diagnosed with Stage III and IV cancer. But, keep in mind, that these endometrial cancers are usually caught before Stage III or IV.

In general, if a woman is diagnosed with late-stage cancer, she will have a lower survival rate. Additionally, older women typically have shorter prognoses than younger women. Furthermore, African-American women tend to develop more aggressive forms of endometrial cancer and therefore have slightly lower survival rates than Caucasian and other ethnic groups of women.

Luckily, the recurrence rate of endometrial cancer is very low, between 3 and 17 percent. Most forms recurrences develop outside of the pelvis, and most recurrences occur within two to three years. Patients who suffer from higher stage endometrial cancer are more likely to suffer a recurrence than those with lower stage diagnoses. The most common site of recurrence is in the vagina which is good news because that also is also the easiest place to treat.

One of the biggest problems with endometrial cancer is that people do not understand the symptoms. Please, share this article and inform your family and friends.

THE BEST ENDOMETRIAL CANCER / UTERINE CANCER PHYSICIAN NEAR ME

GYN LA is conveniently located in Torrance, California, in Los Angeles County in the South Bay at 23600 Telo Ave. Ste. 250, Torrance, CA 90505. Our office is open Monday through Friday from 8:30 a.m. to 5:00 p.m. We are staffed by three primary physicians who are experienced in providing a broad range of treatments and services for gynecological-related issues such as uterine fibroids and pelvic prolapses and gynecology oncology, such as vaginal cancer, uterine sarcoma, and hormonal replacement therapies Don’t hesitate to call them today at 310-375-8446 to set your consultation today! The medical team at the GYN LA is dedicated to providing you with unparalleled care

Our lead doctor is currently performing 100% of his uterine cancer surgeries via the Da Vinci robotic platform. Rest assured that Your doctor and our staff will offer you the best treatment options for your particular case.